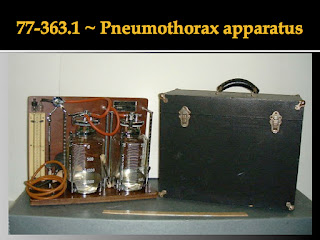 The object I "found" was a Pneumothorax Apparatus. It was used in the 1930's to collapse a lung diseased by tuberculosis, allowing it to heal while the patient breathed through the other lung. The process was called "resting the lung" and it could take months or years for healing to take effect. There was only about 50% chance of success.

My response to the object was elicited from my family history and my father's personal experience of losing both of his sisters and his father to tuberculosis. Tuberculosis was a stigma, a family secret that my father was taught not to divulge to anyone at the time because of the disgrace it would bring to the family.

During the process of working on this project, I thought a lot about the aunts and the grandfather I never knew, about my grandmother who endured the loss of her daughters and her husband to the disease, and about my father who fed his sister her last meal at 21 years old, witnessing her struggle for breath and life to the very end.

I used materials and processes that were able to reflect the qualities of breathing-- movement, transparency, weightlessness; and at the same time the qualities of the disease process-- the struggle to breathe, the strictures and scarring from the disease as well as from the veil of secrecy surrounding it. I chose to work with fabrics and hand-sewing, utilizing found handkerchiefs; a common item used for personal hygiene, they hold a sense of intimacy and fragility-- cared for, monogrammed, embroidered, tatted-- valued as a personal possession, reflective of the era in which they were used.

My piece is titled "For Kathryn" in memory of my aunt. 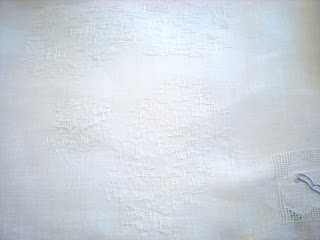 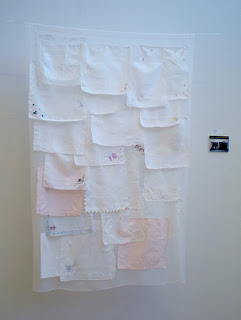 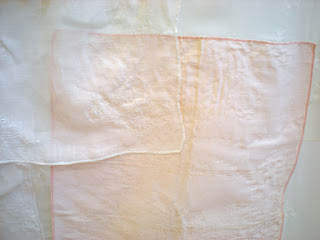 Curator's note: Small white crosses embroidered over and over, meditation and reflection.