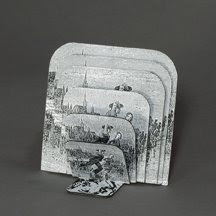 Just Got the News... 5 of my pieces have been accepted to the Modest (in Scale) exhibition at the Abecedarian Gallery in Denver, Co. This is an invitational show of prints and books that runs from
September 19 through November 8, 2008...
To check out the gallery look at www.abecedariangallery.com
(Above is the Skaters~ 4.5" x 4.5" black core child's board book, cut to shape. 1 of 1. ) 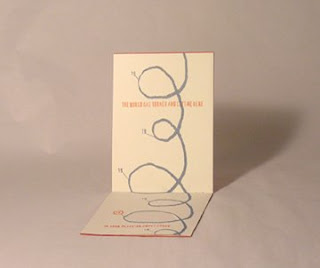 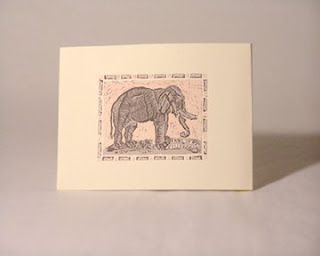 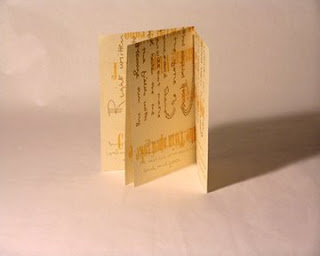 Bound Yoke
~ 5.25" x 4"- Letterpress printed in mustard, brown and sage green with polymer plates on Cream Kitakata paper. Edition of 25.
As a child I found it difficult to read and felt yoked into the letters of the Alphabet.
The Bhagavad-Gita - 2nd Teaching, 16 & 17
~ 3.5" x 4"- 2 Accordion books reflecting two sides of the same text.
4 color digital images on cream paper. 1 of 1.

Folks have expressed to me that I should try to make these into moving images... well I gave it a go... I am thinking a series of books with voice overs reading the text...or not. Sorry it is so small I will upload a better version when I have a better connection..
Cyan... maybe you could give me some tips...
at August 22, 2008 No comments: 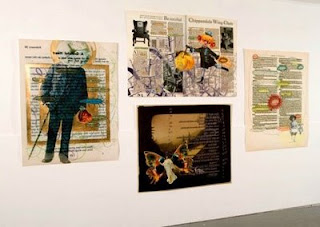 These large images become invitations to see the book as I do. They embody my cross over beyond the mechanized routine of reading and reason by arousing a sense of wonder at the world. In the cross over is the blurred boundary between the real story of the book and the mind reading it. The boundary between the real and the imaginary. This boundary is not to replace the people who have been lost, but a hope to embrace the direct experience of being alive.
These images come together when scanned into a computer, then blown up and printed on a large-scale digital printer. Then I draw over them with different materials.
at August 18, 2008 No comments:

Between Times, Dawn and Dusk, age 38: The Fourth Image 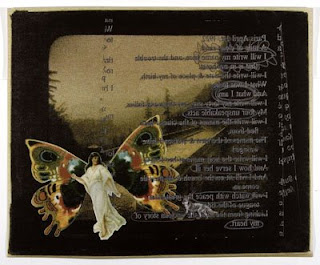 The last piece, Between Times, Dawn and Dusk, age 38...32"x45"... centers around a jewel toned moth winged lady. A white fox slowly follows. The fox represents cunning, wildness and diplomacy. Because it's most often seen at the between times, dawn and dusk, it becomes a guide into the Faerie Realm. This is a poem given to me by my fourth thesis mate, Brianna. In her I've found the friend I missed so much in my grandfather, Jack.
Printed on William Turner Paper, Collage Mixed Media, Digital and Drawing Materials.
at August 18, 2008 No comments:

The Apples of Discord, age 25 : The Third Image

The third piece, The Apples of Discord, age 25.... Also about 4'x5'.... was revealed on a field trip with another of my mates, Cyan. She was looking for chairs to cut apart and reconstruct. While she looked, I flipped through a book of do-it-yourself projects. It almost felt like the floor shook when my most mischievous character appeared. She is a mixture of the gods Loki and Mercury with elements of my brother Jake. She is also a messenger carrying the golden apples of passion and destiny to the most beautiful. Not only is Cyan light hearted, silly, a little naughty and unafraid of her destiny, she holds the same passion I saw in my brother, Jacob.
Printed on William Turner Paper, Collage Mixed Media, Digital and Drawing Materials.
at August 18, 2008 No comments:

A Grateful Heart: The Second Image 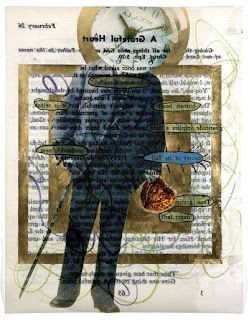 The second piece, A Grateful Heart, age 15 also about 4'x5'... started with a note left by my thesis mate, Taylor, on a book of daily prayers I had disassembled. Her note said that the page on the top was her birthday and, as I glanced at it, my omnipotent father figure appeared. In one hand he carried a golden heart locket. Common gifts of friendship were once heart-shaped lockets with a photo of a loved one, or perhaps a lock of their hair. This piece is a combination of Taylor and my father, John; they remind me to meet each day with a truly thankful and grateful heart.
Printed on William Turner Paper, Collage Mixed Media, Digital and Drawing Materials.
at August 18, 2008 No comments:

Self Portrait: The First Image

Bess, age 8, is my first piece. This image is about 4'x5'. Bess is my oldest character. Beside her sits a teddy bear. In Native American stories the bear replaces the lion as the king of the beasts and is referred to as grandfather. A bear also symbolizes resurrection because it hibernates, and then wakes in the spring. It is my self portrait.
Printed on William Turner Paper, Collage Mixed Media, Digital and Drawing Materials.
at August 18, 2008 No comments:

The thesis year was amazing in so many ways.  This is the proposed artist statement I settled on and worked from:
I am a dyslexic. As a kid my house was always filled with books, periodicals, newspapers and magazines. I would sit for hours flipping through the large stacks while making up my own narratives and characters from the images and the few words I could understand. I'd study their images, personality, and font style while making note on how they were made. they became my friends even though their pages held words I didn't understand and if I decoded their message, I would be a "reader", too.
Even today when I need comfort, I often run to the library and spend the day hiding away from whatever ails me. I'll pull huge stacks impossible to read by the due date, and victoriously set them by my bed. In most cases, I never "read" a page but just slowly flip through and by some strange osmosis the words filtered into my brain. This action seems to ease my own inner struggle with impermanence and loss. I am influenced by Tibetan scroll paintings which are used by adherents to create a place of meditation though the act of seeing.
It is my goal though this work to investigate and create illustrations how I see the interior pages of books. I hope to explore the contradiction between the black and white authority of the printed word in contrast to the effects of image and color layered over them. Some of the images are drawn from familiar iconography, toys, architectural details, mechanical illustrations and symbols, combined with stenciled scenes, decorative patterns and splatters of paint.
at August 18, 2008 No comments: