The Art of Communication – 100 Artist Show 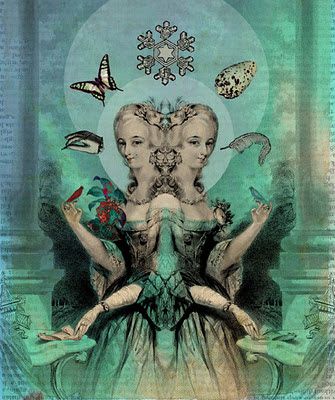 "The Theory of Forms"

The Art of Communication – 100 Artist Show

During the month of February, the Mary Lou Zeek Gallery will be presenting “The Art of Communication”, the 10th annual 100 Artists show. Participating artists received a blank letter through the mail and were asked to write a thought, a story, a description or whatever they so choose and then send to their “partnered” artist. That artist then interprets the writings that were sent to them and then used the writings as their starting point for their own artwork. The completed maximum size will be 12″ x 12”.

My artist statement for this image:

"The Theory of Forms"

I was very excited when I received my letter so I took my time to slowly look over all the elements of it. The first inspiration was on the back of the envelope where I found the number 85 printed twice once right side up and then right next to it again upside down. I began thinking about duality and it grew as I read Betsy's letter. I was imagining her writing in the past while I was reading. She had asked several questions which sent me researching while also thinking if she had already found the answers. I enjoyed playing with the dichotomy from this simple letter. The idea that as distinct and immaterial substances of this object (a letter)and phenomena (the words on the page that carried ideas and questions) that we perceive in the world are nothing more than mere shadows.